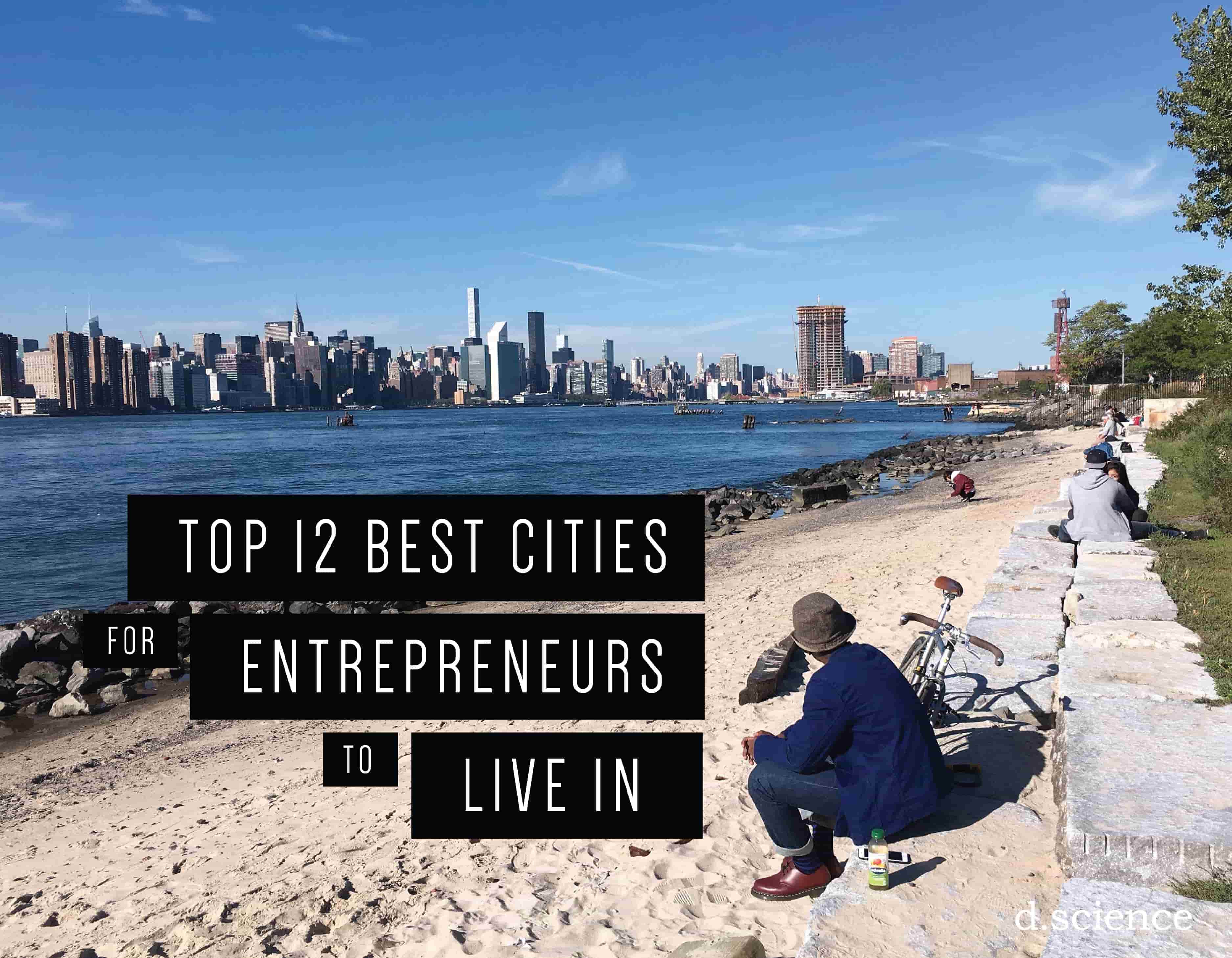 Top 12 Best Cities for Entrepreneurs to Live In 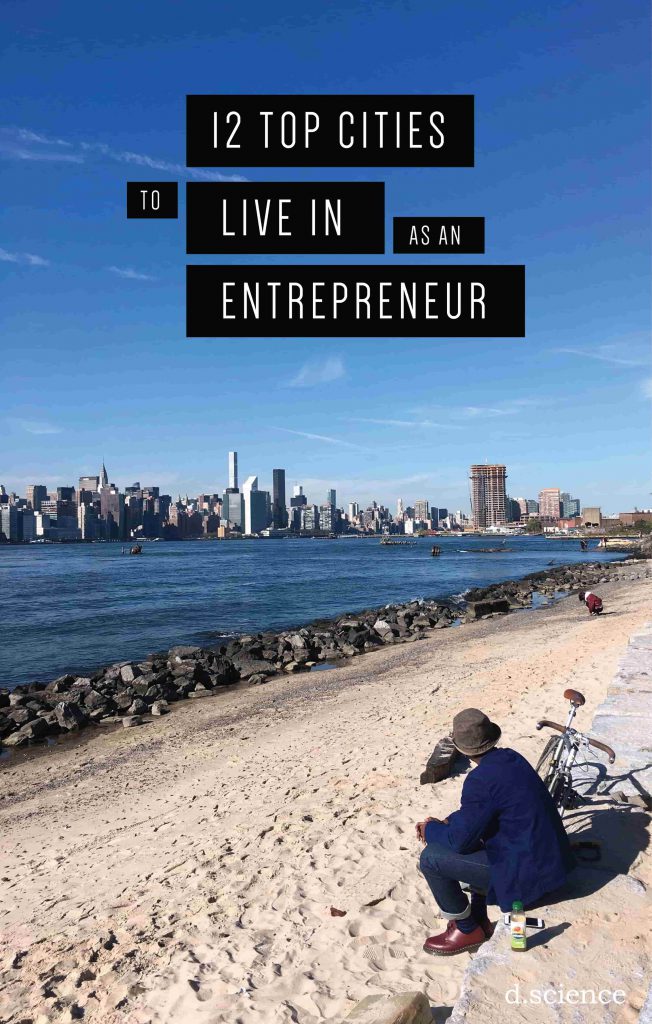 Top 12 Best Cities for Entrepreneurs to Live In

There’s been a trend lately of entrepreneurs traveling all over the world. Sometimes they’re known as freelancers, sometimes digital nomads. Either way, there are definitely cities that are more friendly towards entrepreneurs. When I say “friendly,” I mean how available support is for business, wifi connections, awesome people and cafes.

I’ve only personally been to a few different cities, but after doing  little research, this is the break down I have for ya! Whether you’re just moving through and traveling, or working remotely from different cities around the world—use this list for some inspiration.

Before we even get into the locations, you’re going to want to set yourself up for success.

What You’ll Need to Work from Anywhere

There are a number of ways you can get your wifi-fix. Get a mobile hot spot from your mobile phone, grab a Karma pack, or jump into a coffee shop with a great connection. If you’re looking for a tool to know what coffee shops are nearby and have good wifi/outlets/seating and more —make sure you check out the app: Work Hard Anywhere. It gives you a breakdown of all the important stuff.

A Great Battery for Your Laptop, or Outlets

Whatever your brain fuel is, make sure you have it! Delicious lattes are abundant and available at every coffee shop you can think of around the world. Bulletproof coffee also has these powdered butter and MCT oil packs that you can mix into your coffee on the go for the “bulletproof” lifestyle. If you’re looking to explore the spectrum of smart drugs, take a spin through Tim Ferris’ Youtube video.

Get Solid Headphones to Get in the Zone

Yep, headphones do it for me! I have my Apple earbuds for when I’m walking or long-boarding so I can hear what’s going on around me. When I’m jacking in to my work and getting in the zone, i use my Urban Ears. Music helps you be more productive (literally… it syncs your brain up with your work somehow).

You can probably be a stellar entrepreneur in any city. However, there are specific locations around the world where there are a higher concentration of entrepreneurs and start-up support. Some of the locations are in obvious metropolitan areas, while others are in more remote vacation-like locations.

Either way, spin through the list and pick your next destination!

Amsterdam has a lively, happy culture and its own startup driven scene. It’s an incredibly innovative city with entrepreneurs like Green Graffiti and more. Amsterdam is full of curios, tech-saavy 20-30 somethings, and has a terrific entrepreneur scene.

I keep hearing that Austin, Texas is a bigger version of Brooklyn. I’ve heard that anyone that enjoys the laid-back, cultural, artist-scene in Brooklyn would enjoy the same in Austin. Austin is also known for a fairly large start-up scene with hip businesses.

Bali has been growing pretty tremendously in popularity, probably since “Eat, Pray, Love” came out. It’s become almost like an “entrepreneur’s retreat.” There are co-working spaces in different cities on the island. Many entrepreneurial expats have been relocating there for 1-6 months to get work done while enjoying all that Bali has to offer. It’s relatively safe, and the wifi (thought isn’t powerful like it is in the US) is descent.

From what I hear from both friends and acquaintances, this place is amazing! I can’t tell you how often I heard that Berlin is what Brooklyn is trying to be, in New York. It’s the authentic cultural, artist and hip, open-minded experience. It has a fantastic and extraordinarily active startup culture and is full of entrepreneurs from all over the world.

Thailand has been poppin’ with expat-entrepreneurs from all over the world. It’s relatively cheap to live, the wifi is pretty accessible from what I hear, and the views are incredible. The entrepreneur culture is growing rapidly in Thailand because digital nomads are moving there for 4 weeks to 6 months to work on their businesses surrounded by breathtaking tropical views, delicious Thai food, and a great—young night scene.

Another major metro area, there are a pleathora of startups and businesses in London.

I’m specifically talking about West LA. There’s an entire startup and entrepreneur scene emerging in Venice, Marina DelRey, parts of Santa Monica, and some of the South Bay. I’m sure some of it has to do with Snapchat moving into Venice, and then there’s the beach. The startup culture in Venice is pretty hip and laid back (as you can imagine—people walk the beaches during lunch).

I just keep hearing how hip the scene is in Melbourne. There are tons of startups and entrepreneurs, and the scene is hip and cool. You’ll have the additional benefit of tons of beautiful coffee shops, amazing Australian flat-whites (I’ve had them, not in Australia but from authentic Australian baristas in New York), as well as avo-toast (avocado toast)! Seriously… I’d move there just to have someone make me avocado toast and flat whites every day, haha.

I haven’t been to Miami, but from what I understand there’s quite a business scene here. Of course, it’s a major city so naturally there should be. I keep hearing of more entrepreneurs flocking to Miami… probably for the weather and the babes, let’s be honest.

Okay, I can hear you already. I knew that one, lol. I just had to cover it and make sure it’s on the list. You can find anything you want in the big apple—everything exists. There is a great startup and business culture that I think is relatively easy to get into through networking and meetups. There’s tons of support available in the city that never sleeps. With tons of meet ups and entrepreneurs, you can definitely find like-minded people.

Plus, you should probably live in New York City at least once in your life.

Do I need to say much more? San Fransisico and Silicon Valley are known all around the world for their startup culture. Now, it’s not as “hip” and laid-back as Los Angeles, or Austin, but I’m sure it has its benefits. If you’re looking to play in the big league for tech or the startup world, this is probably the place for you to be.

Seattle has it going on. From the wonderfully laid-back people to the beautiful skylines you’ll enjoy Seattle. Make sure you have habits that can improve your mood as it is drizzly and rainy much of the year. I don’t think I’ve met anyone from Seattle that I didn’t like. Obviously there’s the additional benefit of being in a metropolitan area where networking and connecting with like-minded people is easy.

Why Everyone Should Live in NYC at Least Once

The 3 Secrets to Marketing a Successful Blog or Business

How to Have Over 1,000 Leads Before You Even Start Your Business

Have an idea of where you’d like to travel and work? Let us know in the comments!