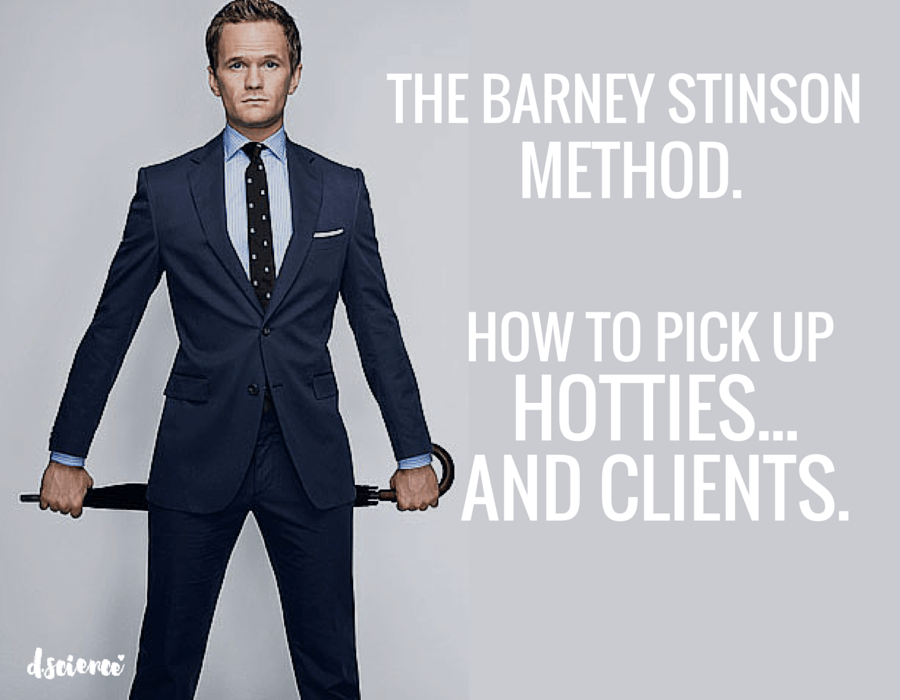 The Barney Stinson Method: How to Pick up Hotties…and Clients the barney stinson method for marketing: how to pick up hotties and clients

Barney Stinson is a fictional character played by the legendary actor Neil Patrick Harris on the hit T.V show How I Met Your Mother.  His claim to fame is his ability to pick up women, specifically those of the gullible hot persuasion.

Over the many seasons of HIMYM, Barney has used a variety of methods and tactics to pick up women. These methods evolve and change over time much like marketing. Take a look at what you could learn in marketing from Barney Stinson.

When picking up clients or hotties in the case of Barney Stinson, one must keep three core principles in mind.

Ladies of limited intelligence are Barney’s forte.  If Barney would attempt to use one of his crazy schemes on an intelligent woman he would get a drink thrown in his face and fail miserably.

There are a number of key characteristics he looks for: overly emotional, daddy issues, under 30 with a body.  A great salesman or saleswoman knows the ins and outs of his or her potential client.  He or she understands the needs, desires, habits, worldview, etc. The more the salesman knows the better.

Barney has a goal: pick up the hottie at the bar. In addition to setting a goal there must be a strategy and action plan in place to achieve this objective.

Barney’s action plan clearly developed in his Playbook. The Playbook is a book full of crazy schemes and gambits to pick up the busty dullard.  When one attempts to get a new client, one must have a plan in place.

This should be no surprise to anyone.  Barney Stinson is extremely confident and he knows it.

Just ask him, he is awesome! Self high-five!  A salesman or woman needs to be confident in three areas: the salesman, the company, and the industry.  Confidence is best gained by flexing your courage muscle.  The more courageous you are, the more confident you will become.

How would one be courageous you ask? Simply place yourself in uncomfortable situations, and overcome fear. CHALLENGE ACCEPTED!

Over the years, Barney’s approach to picking up ladies has changed and developed, much like a business’ marketing plan.

In How I Met Your Mother Barney Stinson’s version of a cold call is walking up to a girl and seducing her.

In the episode Right Place Right Time Marshall (One of Barney’s two BFFs) determines that only 1.2% of the women that Barney approaches actually sleep with him.  The national average success rate of cold calling is 2%, shockingly close to Barney’s success rate. If this sounds like you, it’s probably about time to administer some more effective marketing tactics.

In the episode The Playbook Barney used a variety of fake websites, blog articles and newspaper articles to create credibility in a fake persona: Lorenzo von Matterhorn.

Lorenzo is a fake character that Barney created for when women search him on the internet to find if he is describing himself as a real person. When the busty dullards search for Lorenzo on the internet they find article after article and fake websites for his credibility. The strange lesson: know your market, and follow through.

Barney Stinson evolved his marketing tactics and used various advertising methods to attract ladies.  He called these methods BDS’s or bimbo delivery systems.  Some of Barney’s advertising methods include: automatic dialers, fake T.V ads, and banners being flown behind a plane.

In the episode Rabbit or Duck Barney Stinson holds up a sign during the Super Bowl. The sign asks women to call him with his digits.  This led to a phone that did not stop ringing and hilarity ensued.  Need new marketing tactics? Just hold up a giant sign at a national sports event.

Inbound marketing is creating specific campaigns or content to attract a dream client and qualified prospects rather than seeking them out.

Barney’s tactics have one effective common denominator. Barney attracts a potential lusty lady to him rather than seeking her out. A well learned lesson in acquiring new clients is using your time and energy effectively to attract in the right leads.

>We love feedback and are catering our content to you! Please, if you find this information useful, pass it on & comment…