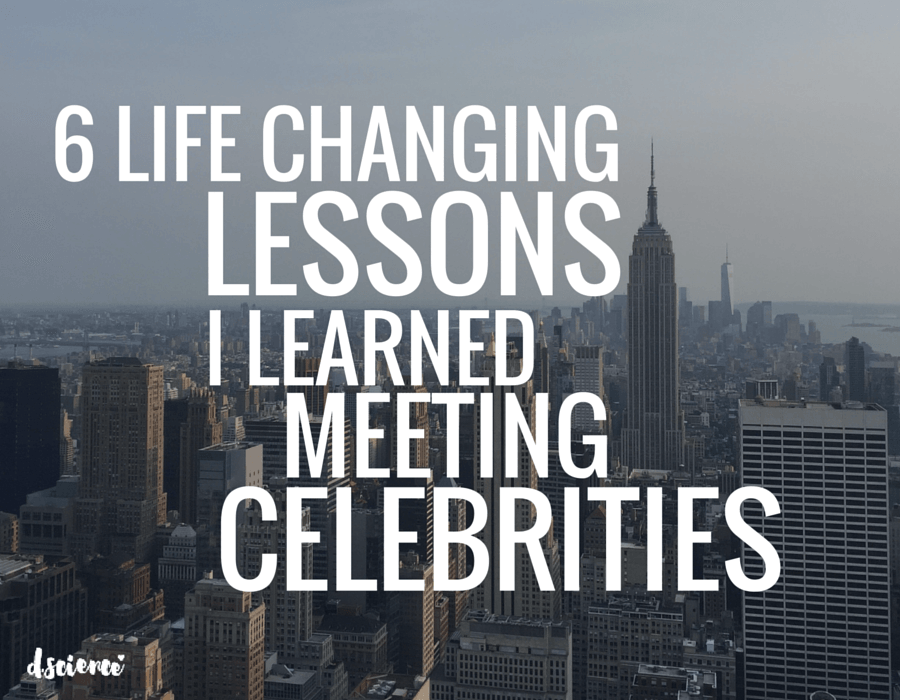 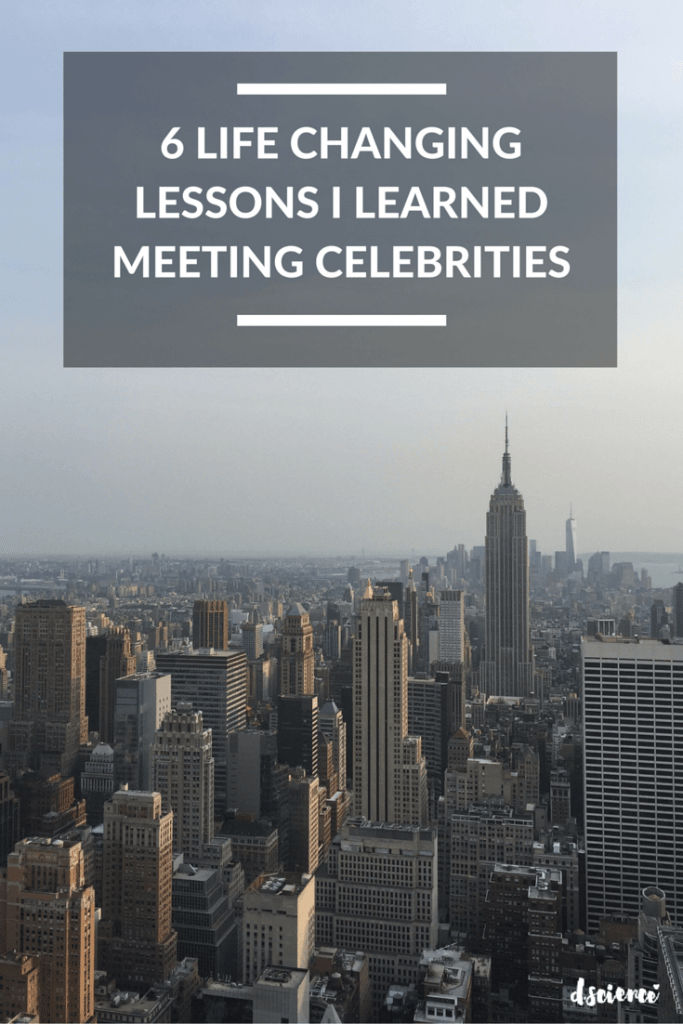 If you take a look at my Twitter profile, you will see that I have a picture of myself with Gary Vaynerchuk. Anyone who knows who Garyvee inevitably asks me how I met him.

What most people don’t realize is: I have also met Seth Godin, Tim Ferriss, Brian Fanzo, and Dave Asprey, and more. Each encounter (some being just mere moments in passing) has taught me many valuable lessons.

Meeting celebrities (even if they are z-list celebrities) is a mindset.

Before I met any of these amazing people I had to make a huge mental mindset shift. It started with a vision board I made over a year ago, with a picture of Garyvee and Seth Godin in the dead center. Every morning I looked at this and imagined achieving my goal of meeting them. This is the basis of any law of attraction or new age thought material. But it makes sense. Focusing on a goal is the fastest way to achieve it.

I didn’t sit on my a#% in a coffee shop “hoping” for them to walk into my life. I knew that if I wanted to achieve my goal I had to take action. I had an end goal and I said, “how do I achieve this?”

First thing is first. I had to get out of the small town of Saratoga Springs where very little happens, and I chose to move to NYC.

You can’t squeeze water from a rock. I went to a place I knew that I had a chance of meeting them (and receiving loads of other opportunities!).

While in NYC, I got the opportunity to attend GaryVee’s live filming of his 100th #askgaryvee youtube show.  I was all excited because I thought: “this is my chance, I finally get to meet him!” 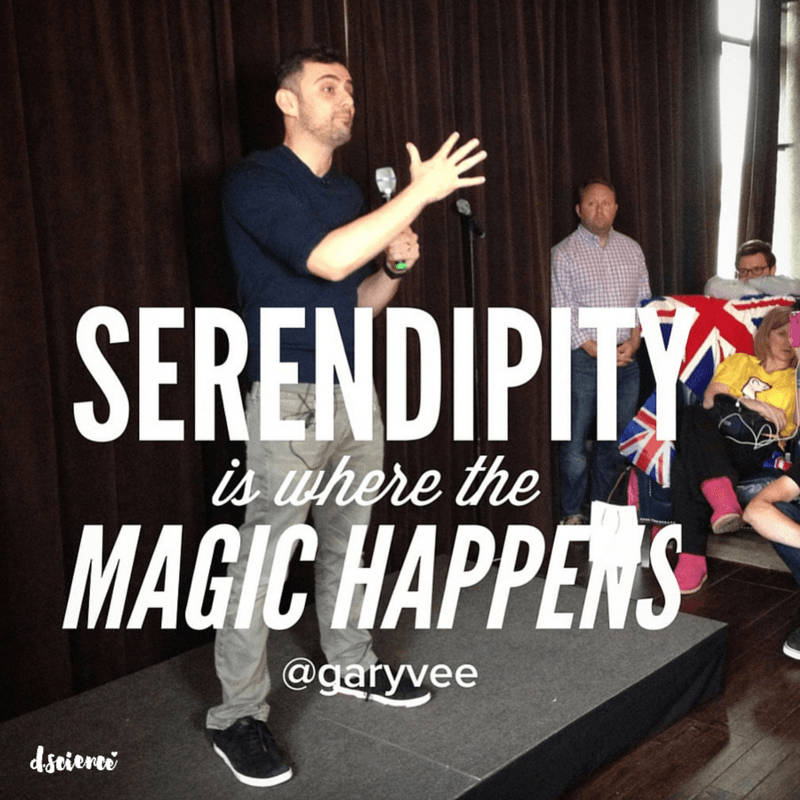 Then Gary drops a huge bomb! He had a meeting with a huge client right after the event, so he couldn’t stick around for selfies and to meet. Immediately, I did the Darth Vader… “NOOOOOOOOOOOO” (silently in my head).

But, there was a ray of hope. Gary mentioned that after the meeting, if he could, he would hold a meetup with anyone who stuck around. This wasn’t going to be until at least 11pm or later.

This taught me my second lesson.

To achieve your goals, You must know what you’re willing to sacrifice.

Anything you want in life takes work. But more than that, it takes sacrifice. In this instance was I willing to wait around for hours, just for a chance to possibly meet this guy.

I was willing to sacrifice: eating short term, feeling disappointed if I didn’t meet Gary, productivity for “getting work done” throughout the day, and more. When you’re clear about what you’re willing to compromise, and what’s truly important to you—you achieve your goals.

My “WHY” was bigger than my “but.” My “why” was huge. In my mind, if I met Garyvee, I was achieving a goal and proving to myself that the Law of Attraction works.

It would be tangible proof that I could achieve something that at the time felt monumental. I have said before achieving goals is like a muscle. You have to set and achieve them to build up the muscle.

From there my muscle became very strong and meeting influential people became easy. By a chance of luck, I received a free ticket to see Seth Godin, and just had to wait around to meet him. I lucked out. I didn’t even know the free ticket would allow me to see Seth until after I attended his live talk.

This showed me my next lesson.

Meet them where they are.

Part of the reason I moved to NYC was because Gary and Seth both operated and worked there. I lucked out with Seth and went to an event he was speaking at. When I met Dave Asprey in LA, he was doing a book signing at Bulletproof Cafe.

Again I lucked out with this one. I didn’t know he was doing a book signing. But a quick book purchase and I got to spend a few moments with him. He has been another hugely influential person in my life.

When I met Brian Fanzo, he was at Periscope Summit. That made sense since he’s a huge Periscope influencer. I can’t stress enough how much you should attend the summit.

The only “random run in” was Tim Ferris. I met him outside a coffee shop… today. Yes luck can have a factor but I think it is more a mental shift, and attracting the experience to you.

Let’s be honest here, Tim Ferriss, Gary Vaynerchuk, Seth Godin, Dave Asprey, and Brian Fanzo all have done much bigger things than I have… so far. Asking about them, and getting them to have a quick discussion gave me the opportunity to learn from them.

Look, we are all have selfish motives. I want to be best friends with Tim Ferriss and the chances of that happening are small if I only talk about myself. But, if I take a page from his book and find a way to assist him, help him and hustle for him, maybe just maybe, I can get a chance of building a relationship.

The most surprising thing I learned in all these encounters is…

They are people too.

It might sound silly but we look at these people almost like Gods. We look up to them with longing eyes, wishing they will give us attention. We think, “why would they pay attention to me!?”

But all of these guys are not famous in the least bit, when you compare them to movie stars and athletes.

They love that people care enough about them to stop them in the street and say “Hi.”

I have personally only had a few encounters where people run up to me and say “Are you Austin Iuliano?” and those few instance have blown me away.

Honestly, it is an unreal experience. The first time someone said that to me, my thoughts were “What did I do wrong?”… I am used to putting my foot in my mouth and sometimes have to apologize for something I did. 😛

When I met each of these amazing people, be it someone smaller like Brian Fanzo, or a big name like Tim Ferriss, one thing comes across: each and every one of them are truly humbled by the experience.

When I met Gary, he was thankful that I gave him attention and he valued me as a member of his tribe.

When I met Brian Fanzo, he was one of the most genuine, nice people I’ve met. He knew who I was because we built a relationship via Twitter and actually knew my name before I introduced myself.

When I ran across Tim Ferriss and I said to him, “Thank you! This just made my day,”

Tim’s response was, “this just made my day.”

Tim Ferriss a millionaire entrepreneur, angel investor, and NY Times best-selling author—felt grateful that I stopped him to say hi.

Make sure to get the selfie.

It might seem silly, but grab that selfie. I know we don’t want to be “that person” who gets star struck and weird. But it is totally worth it.

First and foremost, it is awesome having that picture of you and that other person. For the simple fact that you get to think about that experience every time you see it. Not to mention when you share it on social medias, people engage.

Secondly, Use the photo to your advantage. Having Gary up on my profile has helped me generate attention of other people who know and respect him. It has helped me start conversations and build relationships.

I have never said that I am best friends with Gary. I just have the photo in my profile for social proof, and it helps.

We are all competing for attention, and when you are small you must use every resource available to you. Even if it is something small like a photo with a celebrity.

What was your experience meeting a famous person? Let us know in the comments!